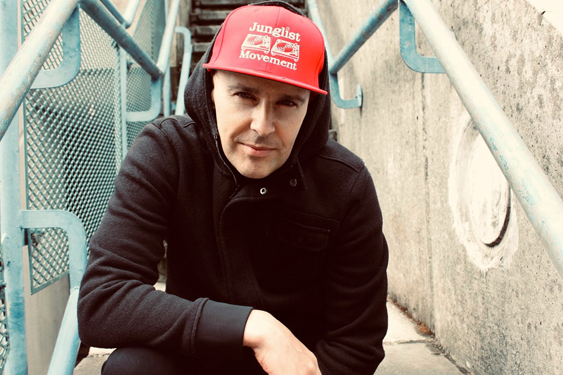 If you have been keeping up with the times, then you should have heard about the new Violet Nights Recordings (VNR) label. Label owners DJ Flash and Chippie have been working nonstop to ensure what they are releasing is top drawer and must-haves for vinyl collectors. With artists like Blame, Lucida, Seba, Greekboy, Okee, and Solaris, among others, on the release lineup, our ears are in for an abundance of quality beats this year as VNR hits the scene with fresh Atmospheric D&B sounds.

VNR’s first release is by renowned artist Blame — and what a release it is! VNR makes a huge statement with these two tracks, showing us that the label will be unstoppable this year. For more than 20 years, Blame has given us beautiful music from labels such as Moving Shadow, Good Looking Records, and his own 720 Degrees. A legend in my eyes, though also a humble soul, it is an absolute honor to interview Blame about his new release on VNR, which is due for preorder via VNR’s Bandcamp on Friday, March 5th. Available in a limited-edition purple vinyl or standard black vinyl, the label is being kind enough to offer two rounds of preorders, at 1 p.m. and 7 p.m. (UK time). But I warn you: Be quick with those trigger fingers, as this is sure to keep the F5 crew busy!

Hey Blame, thanks for taking the time to do this interview. You are having quite the year thus far — as seen with the high demand for your first release on Over/Shadow, which has resulted in the label repressing OS001. How does it feel knowing your music is still highly sought after?

It’s been an amazing few months. The Over/Shadow record was my first vinyl release in 10 years, and it was a real honour for me to see all the love that it received. That positive response gave me the bug to release lots more music on vinyl, so I’ve teamed up with an exciting new label called ‘Violet Nights Recordings’, and we’re going to be bringing out loads of my unreleased dubplates this year.

You made a video a while back showcasing clips of the tunes you produced 20 years ago that you found the DATS to and will be releasing on VNR. You stated in the video that you used to make tunes just to play out in the clubs so you could stand out from the other DJs; I think most of us know this to be true because we have been asking for tune IDs to mixes for years now.

So let’s talk about “Understanding & Knowing” when did you first make this tune? Did you ever send it to any labels back in the day? What made you choose this specific tune to release with VNR?

I made ‘Understanding & Knowing’ in 1996, and I didn’t send it to any labels. The reason was that I needed exclusive dubplates to play in my DJ sets. I needed fresh tunes that nobody else had, so I could make my mark in the scene.

I gave VNR about 18 tracks, and we had a meeting to run through the options for the first release. We threw a few ideas around, and decided that these tracks were the right way to kick off the label.

“In My Soul” has that 720 Degrees vibe to it. Why did you never release this on your own label? What’s the back story on it?

These tracks were actually more valuable for me to keep as unreleased exclusives for my DJ sets. The big DJs could just make a few calls and get all the dubplates they needed, but I had to work a bit harder to get mine... I had to actually make them myself!

I rediscovered the master tapes of these long lost tracks, and amazingly they all still played! It feels like the right time to finally release them into the world.

“Whirlpool,” “Sith,” “Galaxies,” “Hologram 1.0,” and “Icefields” were the other tunes showcased in that video. You electrified us all with joy with this news, which has caused everyone to look at VNR as, perhaps, one of the leaders in today’s Atmospheric D&B resurgence. What are your thoughts on the current movement and where do you see Atmospheric D&B heading? What advice would you give to any up-and-coming producers looking to make Atmospheric D&B today?

It’s a great time for this sound, I’ve noticed a real buzz developing, especially around the unreleased music that was made back in the 90s.

I would advise any up and coming producers to just keep it simple and make the music they want to hear. That way there is a good chance that others will want to hear it too.

As an artist, how do you believe your music has evolved over time? Do you still have the same workflow/gear today as when you first produced “Understanding & Knowing”?

I have a completely different workflow nowadays. When I started making music it was in a full analogue recording studio, but that’s slowly evolved into a completely digital setup. Over time I started to miss those classic analogue synths, with their warmer sound. So I went on eBay and bought back the gear that I’d sold all those years ago!

Do you have any side projects or releases on other labels we should look out for?

I’ve got lots of releases lined up for VNR this year, as well as some exciting remixes for labels such as Kniteforce, Liftin Spirit, and Time Tunnel in the works right now.

Keep updated with Blame at any of the following links.

Check out Violet Nights Recordings at the following links.