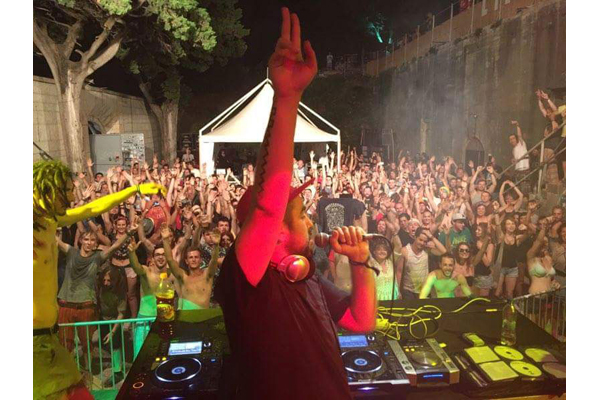 This month DNB Universe caught up with Croatian producer & dj Filip Motovunski. He keeps busy djing throughout the Balkans and his new single "Lava" & "Shakka" have been getting support from Hype, Alix Perez, & Skeptical to mention a few.

Hello Filip,..can you give readers a little background on your where you are from, and what are some early inspirations for your production/dj style?

Hello! I am from Croatia, from a little town called Motovun which is half an hour from Outlook Festival location. Lived there my whole childhood but last few years stationed in capitol city Zagreb. When I was around 13 I discovered hip hop music and since then I've been producing beats. Had a rap band where I used to rap also until I discovered drum and bass when I was about 17. Since then I'm all about producing and dj-ing drum and bass. With this Lava song I kinda went back to my roots with laying my vocals over, but this time in english.

You have a new release out right now on the, Breaks Per Minute label. It's nice to see DJ Hype giving some air time on his broadcast for "Lava". Are you happy with the feedback you have recieved so far on the new single?

Oh yes, for me this might be the biggest achievement till now. Really excited how this release is getting through with both tracks. “Shakka” track is also finding its place in some big dj sets like for example, Alix Perez b2b Skeptical on Radar Radio a few days ago. Also, despite better quality of my production, Breaks Per Minute label is doing great job promoting the release which is crucial obviously to finally get heard and played by guys like mentioned above.

Do you have a good dnb/jungle community in your local area? Any regular event nights you would recommend?

Yes! In every side of Croatia we have at least one crew pushing dnb sound. If you end up in Zagreb I recommend events by the Dirty Beatz crew because you might bump into a dj you know, since they are probably only ones who bring guys like June Miller, Mefjus, Billain, Amoss etc. Vu Bass crew is settled in Osijek town that is east side of Croatia and they also have regular nights but also bigger festivals where Teddy Killerz played last time. In a week they’re bringing Rockwell for example. So to conclude, many crews exist and are doing great nights but a few really bring bigger names. I am also organizing “Drama” night in a club called “Crkva” in Rijeka town where I am managing to keep the night alive for years just by bringing artists from Croatia. So I can say we have a pretty cool scene. Don’t get me wrong, if you have 300 heads on the party this means big to us! haha

Are you able to make regular time for producing or just whenever you have a free moment?

I dj enough in the Balkans area to be able to live off gigs and occasional side projects. So, I have the luxury to produce whenever inspiration comes and lately it's a pretty lot.

Do you have some new remixes or collaborations in the works right now that you can tell us about?

Uh, I think I have around 15 tunes that are waiting their sunrise. Must admit its a bit frustrating to not be able to release something as soon as its finished but have to play by the rules! After this Lava/Shakka release I got some nice opportunities for some bigger labels but have to be patient for now. I believe something good will happen. Wish me luck! :)

Any upcoming shows or releases that you would like to tell readers & followers about?

If by the power of destiny you end up in Croatia you can catch me up on big New Year’s Eve party in Pula organised by Seasplash festival crew, or week before in Rijeka on my “Drama” night. Still can’t announce a gig outside Balkan boarders, but soon! Soon!!!

Of course, thanks for your interest and massively massive shout out to DNB Universe and all the djs supporting my new release and everyone supporting dnb sound in general! Biggidy up!

Keep tabs on Filip Motovunski at any of the following links: